Author’s note: I really won’t discuss the book because I haven’t read it yet and I don’t know much about the novel and it’s development history to comment. I’ll mostly be discussing the movies.

I love myself some Starship Troopers movies. They’re fun sci-fi films that reveal the fascist in all of us because big space bugs causing humanity to go extinct just doesn’t sound like a lot of fun at all. Starship Troopers: Invasion is the fourth film in the franchise, but unlike the original movie and Starship Troopers 3: Marauder,  Invasion lacks the camp, humor, and satire that make the other movies not just fun, but also smart.I’ll summarize Invasion in as few words as possible. A starship called the John A. Warden is commandeered by Carl Jenkins, a creepy scientist from the first movie, from Carmen Ibenez, a pilot turned starship captain who was also present in the first film, to run some crazy nefarious experiments. The John A. Warden goes missing, and the ship a group of troopers and Captain Ibenez are on get orders from General Johnny Rico, the main protagonist of the original novel and first and third movies, to find out why the John A. Warden was lost. I’ll leave it from there, but the plot is solid. Nothing I can really complain about. It’s not the best, but it stays consistent and flows from point to point without any major issues.

That’s the set up, and the first ten minutes of the movie are pretty great. Starship Troopers: Invasion has the human soldiers fighting bugs in power armor. Bugs explode. People get bitten into two pieces or more. A sniper jumps from an exploding space station onto a starship. It’s just plain cool. And then it gets both boring and trite for the rest of the first third of the movie thanks to some not-awful-but-not-as-good-as-it-could-be writing, distracting CGI, and a serious lack of satire.

Starship Troopers 3 feels a little more targeted about criticizing government actions against dissidence and protests, how religion can be used by those in power to manipulate others, and how deadly shovels are. Would you like to know more?

The satire and gushing machismo surrounding these movies made the not so actiony scenes of those Starship Troopers films so much fun to watch. Sure, they are violent, but they got a bit of a brain behind the gun barrel. Also, these clips are from the original and third Starship Troopers movies, and they provide much of the satirical jabs the movie delivers. Invasion has none of these bombastic “news reels,” which feels like a loss. Without those clips, the one liners about “everyone doing their part” and “Would you like to know more?” leaves Invasion with less of less brain, making it melt into the crowd of sci-fi action movies a little more easily.

And that brain is precisely what Starship Troopers: Invasion lacks. Without the wit, there’s very little of the comedy and weird, grim-dark, authoritarian camp present in the first and third movies. There are a few funny moments, but the squirm and cringe inducing social commentary that elicits uncomfortable laughter and multiple “Oh, dears” is missing. This results in a lot of characters standing around talking and generally not holding my attention because their conversations are merely gums. I am aware the characters are talking, but I as an audience member am unaffected. Sure they’re moving the plot along, but the cast doesn’t do too much more than that.

The only reason my eyes meandered to the screen was to watch the really well done animation. And don’t get me wrong, the animation is gorgeous. Every scene in this movie is generally well-composed. But there’s nudity in the movie. This being a Starship Troopers movie, I was expecting people to get naked. It’s just annoying to me that the animators really, really pushed just how amazing those naked CGI babes could look. There are at least three or four instances of women being naked or near naked in the film, and I found those instances more distracting because they add no value to the film thematically or plot wise. These scenes are a  gimmick to show off just how far 3-D, anime CGI animation has come along. In Starship Troopers 3, the only scene in which the cast get naked is so they can get their bodies and brainwaves scanned to pilot their mech suits, and those scenes have build up with the characters joking, talking about the war and giving us insight into them as people. Even though the characters in Starship Troopers 3 are simple, I was still able as a viewer to understand their motivations. Invasion just doesn’t do too good as good of job of doing that due to weaker writing. It has a lot of the characters talking about other characters, which tells the audience about the characters rather than showing the audience the characters.

For example, there is a scene in which a  character named Chou is doing some martial arts training. Another trooper called Ratzazz comes up to him and calls it dancing. They get into a sparring match, and one of the characters watching the fight calls the Ratzazz dumb, but strong while another character claims Chou is nimble, and that those traits will win the fight. Chou is handing Ratzazz…well, his ass, to him, and then a trooper named Ice Blonde walks in, drops her towel to motivate the Ratzazz and he lands a punch on the Chou. Both of them are beaten in what should be a funny scene but isn’t because Invasion pulled a “ooh, men are distracted by naked women” type thing. Now that I really think about that scene, it’s degrading to everyone who watches it.

In another exposition scene, Tia “Trig” explains to Bugspray (the dude that’s bunking with her) why she carries a certain kind of sniper rifle and counts how many bugs she’s killed to honor and remember her hometown which got wrecked by bugs. It’s a backstory I probably read 100 times when I was into roleplaying online. “Oh, my village and everyone in it was killed by XYZ. Now I’m angry and driven by vengeance, which explains my quirks.” God, if I had a nickel for every time I saw THAT type of character, I might have a few fistfuls of dollars to shove into my bank account. Besides that backstory and scene, I liked Trig because she did some pretty cool stuff. In one scene on the John A. Warden, she takes the incentive to do something when many other characters just stand around looking confused and bamboozled without an inkling of an idea of what to do. She goes out in a blaze of glory with her rifle, deciding that if she’s gonna bite the big one, she’ll take a few bugs with her.

I’m being really hard on Invasion, but the other two Starship Troopers films I watched get their characters across so much better. For example: in Starship Troopers 3, a general named Dix gets into a fight with a farmer on a colony called Roku San. The farmer keeps beating the utter crap out of Dix while Johnny tries to calm the situation, but it all goes wrong when Dix keeps piling charges on the farmer to instigate him and he pulls a pistol on him. Johnny stops the would-be execution and gets punished as a result of his friend’s bullheadedness. From that one fight scene, I learned that Dix knows the rules and plays them to his advantage. Johnny obviously wants to save the fighting for the bugs, and I would argue that while he disagrees with the farmer, he is almost willing to stand up for someone even if he thinks they’re wrong. Johnny also calls out his friends on what he interprets as misconduct, even if it means breaking rank. I found myself wanting to know more about these characters and what happens to them in the film. Invasion doesn’t do that, which leaves me emotionally uninterested. Most of the characters are just soldiers with guns. There’s nothing that really makes them stand out too much from each other besides their own little individual quirk, but quirks do not a character made.

What Invasion does well is give the audience plenty of action, and it looks great doing it. This film does a good job of showing what CGI technology can do, even if the characters look a little emotionally flat from time to time. Everything looks sleeker and cleaner than in the live-action movies. I miss the obviously fascist-inspired uniforms from the live-action films, but Invasions aesthetic works in, of, and for itself. I attribute this change because a Japanese animation studio made the film, and Japanese and American movie making is pretty different from each other. The bugs look like what I wish they could have looked like in the first film, and the movie also has all of the troopers wearing Heinlein’s most important creation and contribution to sci-fi; power armor.

Technically, Starship Troopers 3 had power armor, but that armor was more like mechs. Big, lots of firepower, and way more effective and entertaining than a six-pack of cheap beer and a bug zapper on a hot, humid night. Invasion still has the mechs (they show up late in the movie), but the power suits are omnipresent. Every trooper has  their own suit. The suits look cool. It looks a little like the Spartan armor from the Halo games, but it has more details and is generally bulkier. Also, many of the characters have their nicknames written on their armor and some feature paint jobs on their helmets. Little details make watching the movie fun. There are also details about space I wish the animators worked on, but those are gripes I’ll reserve for myself. I DO NOT THINK BULLET CASINGS WOULD FALL IN SPACE LIKE THEY WOULD IN NORMAL EARTH GRAVITY!!!

The last point I want to mention is this…JOHNNY RICO IS IN THE MOVIE AND HE KICKS SO MUCH BUG ASS IT !!! AH!!! HE HAS A MECH SUIT THINGY AND IT HAS CHAIN SAWS AND MISSILES AND AHHHH!!!!! Casper Van Dein (Johnny’s actor in the original and third movies) returns to provide his voice for the character that thrust him into nerds’ hearts and underappreciated BAMF-ness. Johnny Rico does the three things he does best in this movie, and they are:
1: Saving the day.

3: Making sure the bugs he’s fighting get DEAD!!

My final verdict on Starship Troopers: Invasion is that this is a good veg-out movie. It’s not awful, but not great. It’s decent if you want a dumb sci-fi action film because that’s precisely what it is. There are cool moments if you can survive the boring talking scenes to the action filled last half of the second act and the balls-to-the-wall third act that are worth enjoying. However, it lacks the satire of the first and third movies, which is a loss I wish the film could overcome, but can’t due to some just-adequate writing and overall lack of characterization. I’m giving this invasion to the small screen 2 and a half out of 5. 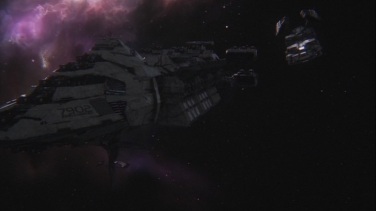 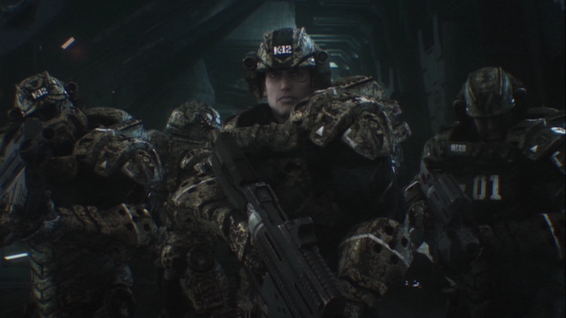 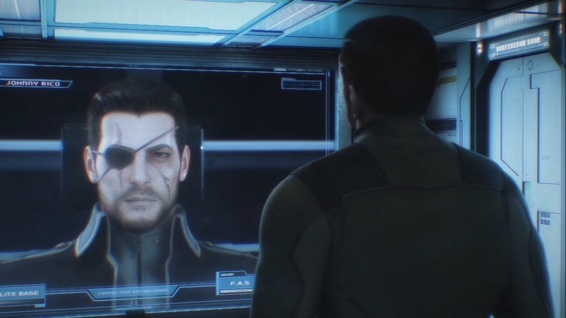